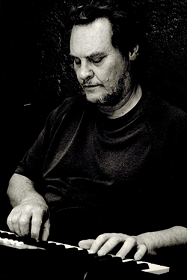 Growing up in the northern suburbs of Sydney Australia in the 1960s, Chris was drawn to the romantic poetry and music of a by-gone era.

While his childhood contemporaries were into the pop and rock music of the day, as a 12 year old, Chris was singing along to the 1955 film song classic “Love is a many splendored thing”.

In his teenage years, Chris began writing his own poetry and music as a way of expressing his heartfelt artistic and musical sensitivities.

On leaving school, he worked for over a number of years in the advertising and recording industries. But his passion for creating and performing more meaningful music remained a driving force.

Chris relocated to Perth, Western Australia in late 1989 where he met his long-term partner Deirdre Croft (mother of Richard, a then nine-year old son with a severe intellectual disability). During many a home-based concert, Richard was also captivated by the calming melodies and soothing lyrics of Chris’s music.

With the support of Deirdre’s practical and organisational skills, Chris resolved to share his music with a bigger audience leading to the 1993 performance of a themed collection of his songs (showcasing a semi-autobiographical musical-in-the-making called “The Gamemaker”).

Despite an overwhelmingly positive response (from the professional singers and musicians who participated in the production and from the audience), the practicalities of taking the production further remained elusive.

Working from his home studio, he also continued to write and record his own songs – as well as recording tracks sung by his “students” – who consistently urged him to get his music “out there”.

A health crisis in early 2018 prompted Chris to reconsider how he might share his music more broadly (and especially to share his evolving understanding of the possibilities for healing and inspiration through “Sound, Song and … Silence”).

In late 2018, Chris connected with an information technology expert, Paul Ong, with an initial brief for Paul to fix up some glitches on the home computer system. When Chris played Paul a couple of his original songs, he suggested that Chris could set up a music-sharing website, and has since provided the IT expertise to make this sharing platform happen.

Chris has resolved that 2019 will not only be a time for continuing his personal quest for health and healing, but also a time for refining AND applying his understanding of the healing power of sound in support of others on the same path.

(PS. Richard is now aged 38 and remains one of the biggest fans of Chris’s music).